new_releases We're currently in the progress of migrating this site from Angular version 5.3.1 to 7.0.0. Package versions might be out-of-date or inconsistent! Visit the repo for more info.

AngularDart (which we usually call simply Angular in this documentation) is a framework for building client apps in HTML and Dart. It is published as the angular package, which is available via the Pub tool.

You write Angular apps by composing HTML templates with Angularized markup, writing component classes to manage those templates, adding application logic in services, and boxing components and services in modules.

After you launch the app, Angular takes over, presenting your app content in a browser and responding to user interactions according to the instructions you’ve provided.

Of course, there is more to it than this. You’ll learn the details in the pages that follow. For now, focus on the big picture. 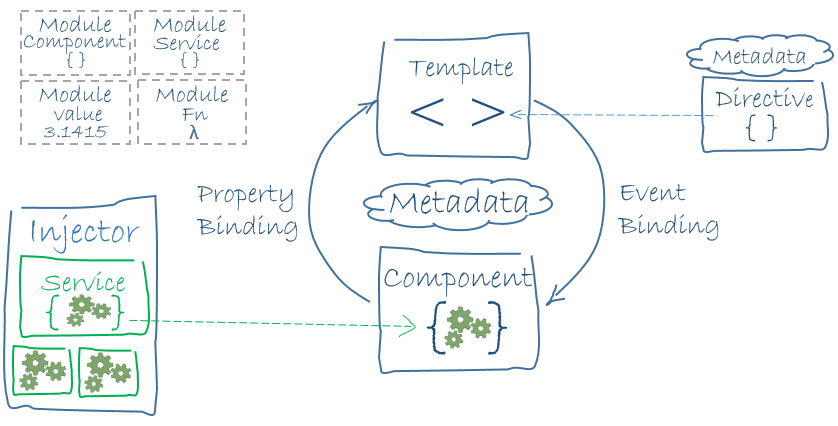 The architecture diagram identifies the eight main building blocks of an Angular app:

The code referenced on this page is available as a live example (view source). 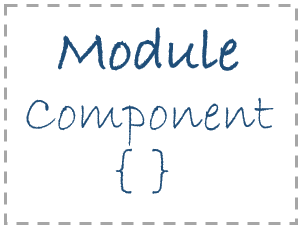 Angular apps are modular; that is, apps are assembled from many modules.

In this guide, the term module refers to a Dart compilation unit, such as a library, or a package. If a Dart file has no library or part directive, then that file itself is a library and thus a compilation unit. For more information about compilation units, see the chapter on “Libraries and Scripts” in the Dart Language Specification.

Every Angular app has at least one module, the root module. While the root module may be the only module in a small app, most apps have many more feature modules, each a cohesive block of code dedicated to an application domain, a workflow, or a closely related set of capabilities.

The simplest of root modules defines a single root component class such as this one:

By convention, the name of the root component is AppComponent. 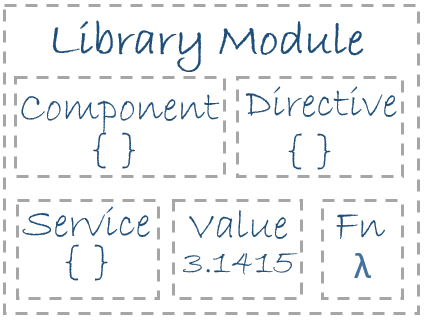 Angular ships as a collection of libraries within the angular package. The main Angular library is angular, which most app modules import as follows:

The angular package includes other important libraries, such as angular.security. 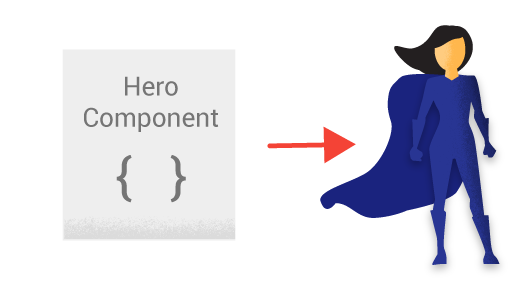 A component controls a patch of screen called a view.

For example, the following views are controlled by components:

You define a component’s application logic—what it does to support the view—inside a class. The class interacts with the view through an API of properties and methods.

In the following example, the HeroListComponent has a heroes property that returns a list of heroes that it acquires from a service. HeroListComponent defines a selectHero() method that sets a selectedHero property when the user clicks to choose a hero from the list.

Angular creates, updates, and destroys components as the user moves through the app. Your app can take action at each moment in this lifecycle through optional lifecycle hooks, like ngOnInit() declared above. 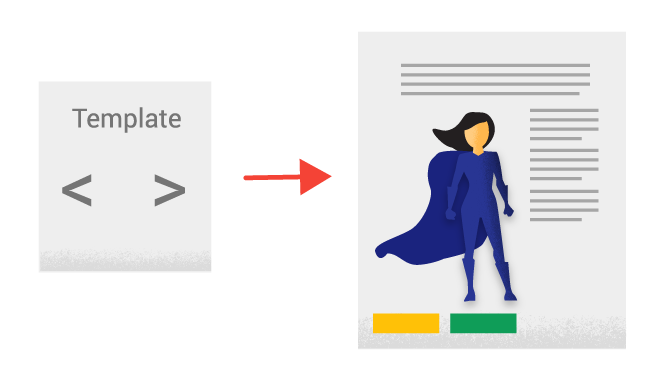 You define a component’s view with its companion template. A template is a form of HTML that tells Angular how to render the component.

A template looks like regular HTML, except for a few differences. Here is a template for the example HeroListComponent: 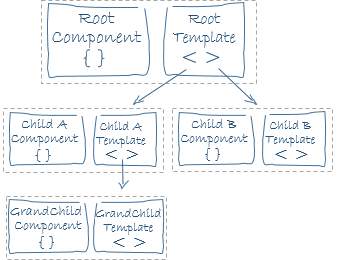 Notice how <hero-detail> rests comfortably among native HTML elements. You can mix custom components with native HTML in the same layouts.

Metadata tells Angular how to process a class.

Looking back at the code for HeroListComponent, you can see that it’s just a class. There is no evidence of a framework, no Angular-specific code.

Here’s some metadata for HeroListComponent. The @Component annotation identifies the class immediately below it as a component class:

The @Component annotation accepts parameters supplying the information Angular needs to create and present the component and its view.

The metadata in the @Component tells Angular where to get the major building blocks you specify for the component.

The template, metadata, and component together describe a view.

Apply other metadata annotations in a similar fashion to guide Angular behavior. @Input and @Output are two of the more popular annotations.

The architectural takeaway is that you must add metadata to your code so that Angular knows what to do.

Without a framework, you’re responsible for pushing data values into the HTML controls and turning user responses into actions and value updates. Writing such push/pull logic by hand is tedious and error prone, and the result is often difficult to read. 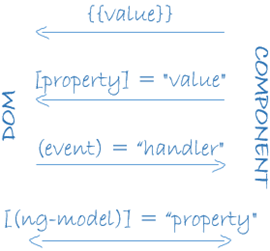 As the diagram shows, there are four forms of data binding syntax. Each form has a direction: to the DOM, from the DOM, or in both directions.

Here are the three ways that the example uses data binding syntax:

Here’s an example of two-way binding from the HeroDetailComponent template:

Angular processes all data bindings once per JavaScript event cycle, from the root of the app component tree through all child components. 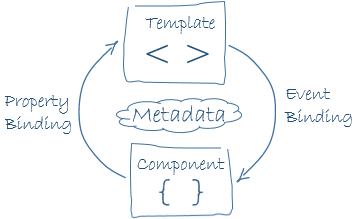 Data binding plays an important role in communication between a template and its component.

Data binding is also important for communication between parent and child components. 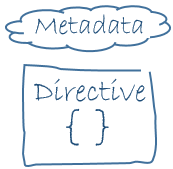 Angular templates are dynamic. When Angular renders them, it transforms the DOM according to the instructions given by directives.

While a component is technically a directive, this architectural overview separates components from directives because components are a distinctive part of, and central to, Angular apps.

Two other kinds of directives exist: structural and attribute directives.

They tend to appear within an element tag in the same way as attributes, sometimes specified by name but more often as the target of an assignment or a binding.

Structural directives alter layout by adding, removing, and replacing elements in the DOM.

In Dart, the only value that is true is the boolean value true; all other values are false. JavaScript and TypeScript, by contrast, treat values such as 1 and most non-null objects as true. For this reason, the JavaScript and TypeScript versions of this app can use just selectedHero as the value of the *ngIf expression. The Dart version must use a boolean operator such as != instead.

Attribute directives alter the appearance or behavior of an existing element. In templates they look like regular HTML attributes, hence the name.

The ngModel directive, which implements two-way data binding, is an example of an attribute directive. ngModel modifies the behavior of an existing element (typically an <input>) by setting its display value property and responding to change events.

You can also write your own directives. Components such as HeroListComponent are one kind of custom directive. Custom structural directives are another.

Service is a broad category encompassing any value, function, or feature that your app needs.

Almost anything can be a service. A service is typically a class with a narrow, well-defined purpose. It should do something specific and do it well.

There is nothing specifically Angular about services. Angular has no definition of a service. There is no service base class, and no place to register a service. Yet services are fundamental to any Angular app. Components are big consumers of services.

Here’s an example of a service class that logs to the browser console:

Here’s a HeroService that uses a Future to fetch heroes. The HeroService depends on the Logger service and another BackendService that handles the server communication grunt work.

Component classes should be lean. They don’t fetch data from the server, validate user input, or log directly to the console. A component’s job is to enable the user experience and nothing more. It mediates between the view (rendered by the template) and the application logic (which often includes some notion of a model). A good component presents properties and methods for data binding. It delegates everything nontrivial to services.

Angular doesn’t enforce these principles. It doesn’t complain if you write a component with 3000 lines of code that does everything in your app.

Angular does help you follow these principles by making it easy to factor your application logic into services and make those services available to components through dependency injection.

When Angular creates a component, it first asks an injector for the services that the component requires. An injector maintains a container of service instances that it has previously created. If a requested service instance is not in the container, the injector makes one and adds it to the container before returning the service to Angular. When all requested services have been resolved and returned, Angular can call the component’s constructor with those services as arguments. This is dependency injection.

The process of HeroService injection looks a bit like this:

If the injector doesn’t have a HeroService, how does it know how to make one?

In brief, you must register a provider of the HeroService with the injector. A provider can create or return a service, and is often the service class itself.

You can register providers with a component, or through the root injector when the app is launched.

Registering providers with a component

The most common way to register providers is at the component level using the providers argument of the @Component annotation:

Registering providers with the root injector

Registering providers with the root injector is much less common. For details, see the registering a service provider section of Dependency Injection.

Points to remember about dependency injection:

You’ve learned the basics about the eight main building blocks of an Angular app:

That’s a foundation for everything else in an Angular app, and it’s more than enough to get going. But it doesn’t include everything you need to know.

Here is a brief, alphabetical list of other important Angular features and services.